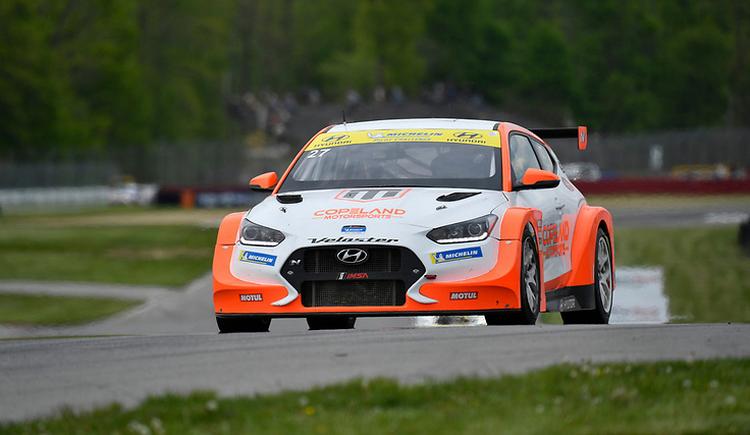 Descending on the famed Mid-Ohio Sports Car Course this past weekend for the IMSA Michelin Pilot Challenge Mid-Ohio 120, the teenage duo of Tyler Maxson and Tyler Gonzalez were looking to turn their luck around. Showing speed in the first two events but relegated down the running order in the results, the Copeland Motorsports drivers turned their season around with a great performance in Lexington, Ohio.

With only four on track sessions all weekend, Friday would be the home of a pair of practices sessions and qualifying that would happen later in the day. After opening the event with the fourth quickest time in the first session, Maxson and Gonzalez were only able to go thirteenth quick in the second session. Fully focused on their qualifying efforts, Tyler Gonzalez would hop behind the wheel and drive the #27 Hyundai Veloster N TCR to a ninth-place result in the timed session.

“We were missing just a little in qualifying, but we have a great car and should be able to move forward,” explained Gonzalez. “After a few electrical gremlins in the first two races, our goal here is to start the race well, move forward and see if we can earn a top-five finish or even a podium. I know we have the team, car and package to do it.

Returning to the track Saturday for the Mid-Ohio 120, Gonzalez would start the race before handing the controls over to Tyler Maxson. Moving forward in the opening stint and keeping their car clean, Gonzalez drove forward in the Copeland Motorsports entry before Maxson took over at mid-race distance. Leading laps and fighting for a podium result late in the race, the teenage drivers that call themselves TnT earned a fourth-place finish, the best result since joining the IMSA program in 2021.

“It was a good event for us, and we know based on our qualifying effort at Sebring and the speed we showed at Daytona that we can fight at the front of this field,” added Maxson. “The Copeland Motorsports crew did another tremendous job, and we are inching our way forward. It is only a matter of time before we win one of these races. Having put our electrical issues behind us, we can now focus on the task at hand.”

“Great job by the #27 entry as the kids never really put a wheel wrong all weekend,” explained Dean Copeland of Copeland Motorsports. “Their time will come, and I think it could be much sooner than many people think.

It will be another six weeks before Tyler and Tyler have their next shot at a win as they need to wait until the June 24-27 event weekend at the Watkins Glen International Raceway that will feature the second four-hour race of the year.