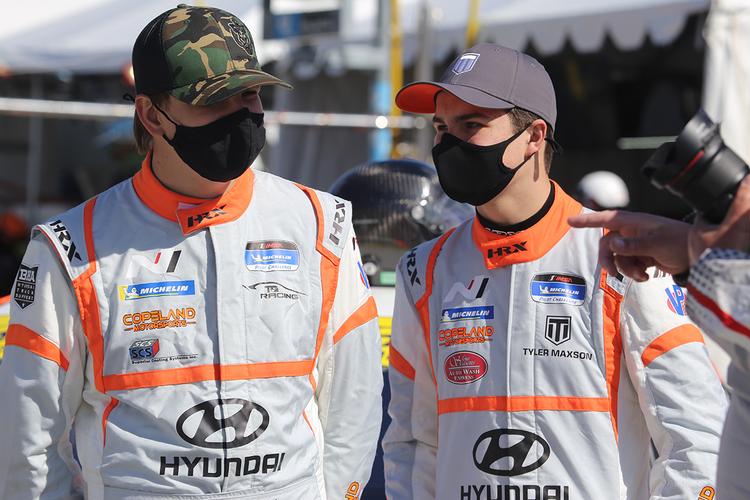 Hyundai Motorsport Customer Racing has named the individuals to be part of the 2021 class for its Junior Driver initiative. Now in its third year the Hyundai Motorsport Customer Racing Junior Driver program includes both circuit racing and rally drivers competing in the company’s cars, with the goal of supporting them as they build their motorsport careers.

To help them on this path each driver selected will be able to call on the support of the Customer Racing department’s engineers, as well as mentoring from Hyundai Motorsport’s top drivers. The scheme will also help them enhance their image away from the track, with coaching on how to present themselves both online and in person to the media in order to build the strong profile needed for success in the World Rally Championship or WTCR – FIA World Touring Car Cup.

For this season the group is led by the trio of drivers who will represent Hyundai Motorsport in WRC 2. Norwegian Ole Christian Veiby continues into a second year with both the team and in the Junior Driver program, but is now joined by teammates Oliver Solberg and Jari Huttunen.

All three bring glittering CVs into their i20 R5 cars for the start of their 2021 campaigns, Solberg coming as ERC 1 Junior champion and Huttunen as both the Polish national and WRC 3 champion following a stunning season with the i20 R5 in 2020. They will be joined on the WRC stages by Pierre-Louis Loubet, who as in 2020 lines up in the premier WRC class aboard a customer team-run Hyundai i20 Coupe WRC, standing on the final stepping stone of the Junior Driver rallying path.

Also continuing as a Junior Driver, after a strong debut season in the i20 R5, is Gregoire Munster. After running Solberg a close second in European competition in 2020 he now turns his focus to the Belgian championship with the BMA team, though he is also planning to run a handful of international events as championship schedules allow.

A new face to the Junior Driver ranks, though not behind the wheel of the i20 R5, is Josh McErlean. As part of the Motorsport Ireland Rally Academy McErlean drove a Hyundai in several different national and international level events in 2020, culminating in a WRC outing in December’s Rally Monza. There he was able to match the series regulars in some of the most difficult driving conditions of the season. In 2021 he will focus on a WRC 3 challenge, whilst also taking on events in the European and British Rally Championships.

Czech driver Jáchym Galáš steps up from TCR Eastern Europe to TCR Europe in an i30 N TCR for the coming season after joining the Janík Motorsport team. After taking podiums during 2020 the 19-year-old will enjoy the support of the Junior Driver program as he moves to take on a new challenge in the highly competitive series, one rung on the TCR ladder below FIA WTCR.

The youngest members of the 2021 Junior Driver group are 16-year-olds Tyler Maxson and Tyler Gonzalez. The pair will share a Copeland Motorsport Veloster N TCR in the IMSA Michelin Pilot Challenge after enjoying excellent results in 2020. Maxson dominated the TC America series in his debut with the Veloster N TCR, scoring 11 wins – including the first 9 races of the season – on his way to the title. Gonzalez, meanwhile had a strong year in a Hyundai Veloster Turbo which is based closely on the production model.

Together they made their IMSA debut at Road Atlanta in October, where they finished an excellent second after racing wheel-to-wheel for victory in the final laps of the race. In a full season in the series in 2021 they are aiming to repeat – and improve on – their initial success.

The line-up is completed by Malaysian driver Mitchell Cheah, who is planned to take up a seat with the highly successful Engstler Motorsport that has won multiple titles with the i30 N TCR in both Germany and Asia. Despite having his 2020 plans disrupted by restrictions bought in to combat the spread of coronavirus Cheah made one-off appearances in TCR Germany – where he took pole position and a podium at the Red Bull Ring – and FIA WTCR.

In racing with the Engstler Motorsport team he follows in the footsteps of Luca Engstler, who took full advantage of the support offered by the Junior Driver program in its first season, graduating to a full time i30 N TCR drive in FIA WTCR in 2020.

With the nurturing support of the Customer Racing department – indicated by the Junior Driver logo on their cars and race overalls – it is hoped that the 2021 class can emulate Engstler’s success in his career, and also continue the winning record of Hyundai customers in series around the world.

Hyundai Motorsport Customer Racing Operations Leader Andrew Johns said: “The commitment to nurture young driving talent is a vital part of the Customer Racing department, and Hyundai Motorsport in general. We recognize that we can build the best cars possible, but we also need strong drivers that are able to get the maximum performance on the track, or on the rally stages. Through the Customer Racing Junior Driver initiative we can support some of the best young drivers competing with Hyundai customers in major rally and TCR championships around the world. By working closely with them and their teams we can help each one constantly improve, in order to get the best possible results and build their professional motorsport careers towards a place in the WRC or on the FIA WTCR grid.”