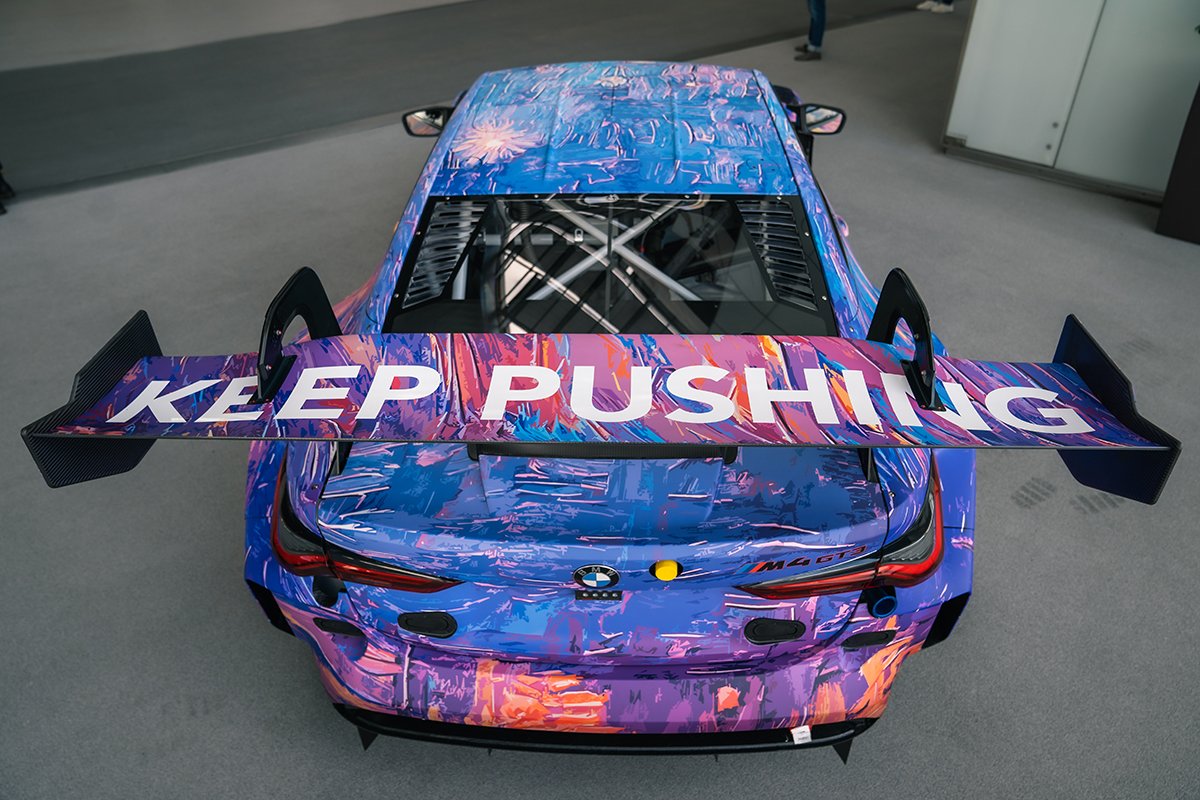 ST Racing is pleased to confirm the driver line-ups for both of its BMW M4 GT3s for the 2022 Hankook 24H DUBAI.

For its second season in the endurance-focused 24H SERIES, into which the Canadian team goes as the reigning Overall GT Teams’ champion, ST Racing is stepping up to the top tier GT3 class with its two brand-new BMW M4 GT3s. At the season opening Hankook 24H DUBAI, one – Car #28 – will compete for overall victory in the PRO class, while its sister Car #1 has been registered for PRO-AM competition.

Team co-owner Samantha Tan leads the driver line-up in the #1 BMW, and will be joined by Harry Gottsacker, Anthony Lazzaro, Tyler Maxson and Bryson Morris. Alongside the Overall GT Drivers’ title, Samantha Tan was successfully crowned champion in the GT4-class Drivers’ standings, the Ladies Cup, and the Junior Cup in 2021.

An established frontrunner – and race winner – in the Michelin Pilot Challenge since 2019, Harry Gottsacker is a former champion in the West Pro-Am Cupranks in the GT4 America Series, securing said silverware with ST Racing. Harry brings prior GT3 experience in the WeatherTech SportsCar Championship and British GT to ST’s PRO-AM contender.

Accomplished American racer Anthony Lazzaro is a two-time 24H Daytona winner in the P2 Prototype and GT classes with nineteen 24H of Daytona race starts, and eleven Petit Le Mans starts in his home state of Georgia. Anthony helped BMW win their first manufacturer’s title in 11 years during the 1997 Speed Vision Cup with 6 race wins driving a BMW 328is. BMW thus attained the Championship Title; a first for the manufacturer since 1986. Anthony makes his return to the 24H SERIES since competing at the Circuit of the Americas in 2019 with ST Racing.

Tyler Maxson made his SRO GT4 America Series debut with ST Racing in the 2021 Pirelli GT4 America SprintX at Road America taking Silver class victory during his maiden outing with Harry Gottsacker. Prior to that, the 17-year-old Georgia native impressively won the TCR-class and TCA-class championships in the SRO TC America Series in 2019 and 2020.

Texas resident, Chandler Hull, had a late start to racing, but that has not deterred him from making rapid progress in just a few short years. He won Rookie of the Year in 2018’s SRO TC America during his first-ever season of racing. He has since established himself as a multiple race winner and podium contender in Creventic’s 24H Series, SRO’s GT4 America, the Nürburgring-based VLN (now NES) and even saw him on the podium in his GT3 debut during the 2021 Asian Le Mans Series.

A race winner last year in the 24H SERIES at both Dubai and Barcelona, Nick Wittmer is a three-time class champion in the Canadian Touring Car Championship, and has been a regular title contender – and race winner – in the Pirelli World Challenge, TC America and the GT4 America Series since 2016.

Louis-Philippe Montour rounds out ST Racing’s driver line-up. Most recently a competitor in the Canadian Touring Car Championship, Louis-Philippe is set to make his endurance racing debut at the 24H DUBAI.

Kenneth Tan, team owner: “I am very excited to start the next step of our evolution as a racing team. Most of the drivers in our lineup are well-known to the team and we have all found success working together. It’s a great family atmosphere and we cannot wait to race both of our new M4 GT3s in Dubai together. Car #1 arguably has the youngest ever line up with Bryson and Tyler both only 17 years old and Harry being 21. Samantha is actually the oldest among the junior drivers. The juniors will benefit from Anthony Lazzaro’s precious wisdom gained from his extensive race experience running multiple races at the Daytona 24H. On top of that, we’ve barely had any time to work on both cars as they practically went from the BMW Welt straight to Rotterdam port for their transport to Dubai. The first time we get to do anything with the cars will be during the first unofficial practice in Dubai. Thus, our goal in Dubai is to learn the cars and have fun at the same time. Nevertheless, it is an exciting time and I cannot wait. It’s only five weeks away!”

Samantha Tan, team co-owner/driver: “It’s going to be a new year, with a new car, in a new class! It’s a bit overwhelming to think about, but we also went into 2021 with the same mindset to manage expectations and do the best we can to win. We did just that and came away with 6 championship titles. It will once again be a steep learning curve next season, but I know that this past year has given us the learning experiences needed to execute and perform well once again. I’m so excited to be joined by my fellow championship co-drivers: Nick Wittmer, Jon Miller, Chandler Hull, Harry Gottsacker, and some old and new faces: Anthony Lazzaro, LP Montour, Tyler Maxson, and Bryson Morris (who also just ran with us at the Sebring 24H). It will be a new challenge but we are ready to face it head on.”

Harry Gottsacker, driver: “I am looking forward to getting started in Dubai with ST Racing’s new effort in GT3. I appreciate the trust that the team has put in me to help lead the PRO-AM classed BMW M4 GT3 in the 24H Dubai. We had a great introductory test at Valencia in October and the team has worked hard to have all the right parts and pieces into place.”

Anthony Lazzaro, driver: “The first Creventic 24H Series race for ST Racing was at COTA in 2019 where we learned a lot of things that carried over into 2020 and 2021, and for me it was the starting point of ST Racing winning the championship in 2021. The Creventic 24H Series is an excellent, well-run series with a wide array of professional and amateur drivers. Having competed in several endurance races in various series, I’m really looking forward to the opportunity to drive in Dubai with the new BMW M4 GT3 car. Years ago, Team Manager Benjamin Distaulo told me “You’ll see”. He had big plans, a big picture, a big idea and it’s come to fruition. I consider ST Racing my Canadian family and I’m incredibly excited to help them in this next chapter as a mentor to the younger drivers.”

Tyler Maxson, driver: “I am looking forward to joining ST Racing in the BMW M4 GT3 in Dubai. We had a great first run together at Road America in GT4 America, and we are looking to build on their successful 2021 season in the Creventic 24H Series. I’m happy they gave me the nod to join them for such an important event and looking forward to fighting for a podium!”

Bryson Morris, driver: “I am very excited to be stepping up to GT3 with ST Racing for the Dubai 24H. It will be a good learning experience and I’m happy they have continued to put trust in me as a driver. With almost 30 GT3 entries it will be a very tough event but I can’t wait for the challenge.”

Jon Miller, driver: “I’m incredibly proud and excited to be starting my 5th season with ST Racing, debuting the new BMW M4 GT3 in one of the biggest GT races on the calendar. As a team, we’re eager to get to work with the new car and apply our experience to the GT3 class. It’s an exciting new chapter and we’re thrilled that our partners GPI BioTech, Kappa Foods, RaceForRP.org and others are coming along for the ride.”

Chandler Hull, driver: “I am super excited to head back to Dubai for the 24H race this year. We started the 2021 season off in the best way possible with a GT4 class win that lead to a dominant season to claim every championship the team and drivers were eligible for! Coming into the beginning of last season, I was the “new guy” and wasn’t sure how I would be accepted, but ST Racing is very much a family and I feel completely accepted by them. This should translate over well to the 2022 season and we should hit the ground running in Dubai with the new BMW M4 GT3. I am really looking forward to getting behind the wheel of the newest BMW. BMW had a very successful run with the M6 GT3 and I am sure that this new M4 GT3 will be better in every way.”

Nick Wittmer, driver: “I’m very proud to be onboard with ST Racing in the 24H series in 2022. Such a fantastic team to work with and a strong family. I’m grateful to be part of the driver lineup for the new BMW M4 GT3. Going back to Dubai for the 24H with this incredible new machine will surely put a smile on everyone’s face.”

Louis-Philippe Montour, driver: “Where do I start? As a race car driver, naturally you want to succeed and be the best in the competition! ST Racing has proven time and time again that they are the team to accomplish that mission with! I cannot wait to make my debut in endurance racing with a Canadian Team and the brand new 2022 BMW M4 GT3.”

On its Hankook 24H DUBAI debut in 2020, ST Racing impressed by taking class pole position for the event and remaining in contention for victory with its M4 GT4 before heavy rain caused the 24-hour race to be called off. The following year, having once again taken category pole position in Dubai, ST Racing secured its maiden 24H SERIES victory at the event with Samantha, Jon, Chandler and Nick at the wheel. Three further category wins would follow across the 2021 season en-route to the Overall GT honours in both the Drivers’ and Teams’ standings.

The 2022 Hankook 24H DUBAI will take place on 13-14-15 January at the Dubai Autodrome in the United Arab Emirates.