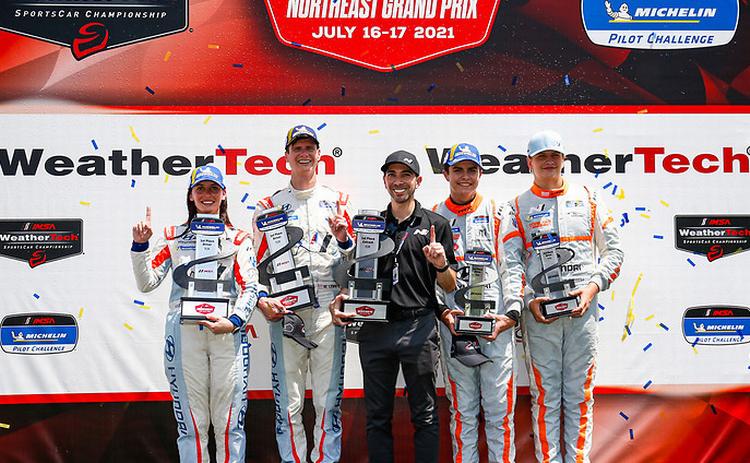 With a season to almost forget up until this weekend, the Copeland Motorsports duo of Tyler Gonzalez and Tyler Maxson entered Lime Rock Park with their goals set high. Piloting the #27 Hyundai Veloster N TCR in the IMSA Michelin Pilot Challenge, the teenagers secured their first career pole position and went on to earn their first podium result of the 2021 season.

Showing pace in the two official practice sessions leading up to qualifying, Gonzalez took the controls for qualifying and was able to steer the Hyundai to a pole position, their third front row starting spot of the season but the first time lining up on the inside.

“We knew we had the speed based on our practice pace, and I was able to put a lap down early in the session,” explained Gonzalez. “It will be great to lead the field to green tomorrow and hopefully this is the first sign of a turnaround for our luck. A huge thank you to Copeland Motorsports, the Maxson family and all of our supporters for sticking by us this season.

With less than twenty-four hours before the green flag, the Copeland Motorsports crew went to work to prep the pole position winning Veloster for the two-hour event the next day and with the green flag set to fly at 11:00am on Saturday morning, the #27 was wheeled to the front of the grid. Gonzalez started the event that ran only twelve minutes before the first caution flag flew. Falling back to third but taking care of his equipment, Gonzalez remained in the top-three before a drive through penalty relegated them to 12th and would begin a spirited drive forward.

Gonzalez added, “As the pole sitter, I thought I had my choice on what side of the grid to line up on, but I guess that was not the case. Our drive through penalty was because I was out of position at the start, but I was happy I was able to overcome that, set the fastest lap in the first part of the race, and hand the car over to Tyler Maxson in good position.”

Rocketing his way back forward, Gonzalez drove back through the field to the third position before the drive change pit stop to Tyler Maxson. Taking the wheel with seventy-five minutes remaining, Maxson pushed forward further to second before falling back to fourth as he bided his time, saved equipment, and prepared himself for a challenge at the win. Moving to third with just over thirty minutes remaining, another full course caution slowed the field as the TCR drivers would once again line up bumper-to-bumper.

With the top-five engaged in a battle for the win, it was hard core racing for the final thirty minutes. Running as high as third and as low as fifth, Maxson was able to advance forward two positions in the final fifteen minutes of the race to give him and Tyler Gonzalez their first IMSA Michelin Pilot Challenge podium of the season.

“Honestly after the luck that we had, this feels like a win for us,” added Maxson. “This team deserves to be on the podium every week, and I think Tyler and I have proved our speed. We have some momentum to build upon now and that is key in any form of racing. Pole position and podium in one weekend, now we aim for the top step of the podium at the next event.”

It will be three weeks off for Maxson and Gonzalez as the duo will now shift their focus to the IMSA Sportscar Spectacular at the famed Road America. Set to take place August 5-6, the pair will look to continue their success into Elkhart Lake, Wisconsin.