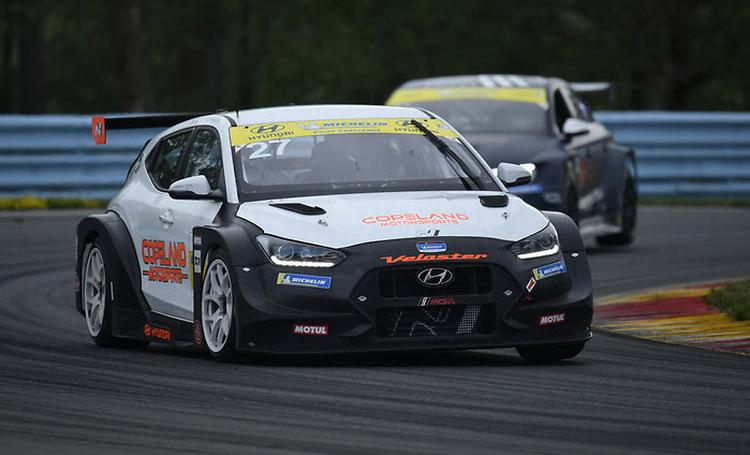 With one totaled race car and a post-race disqualification for weight, Tyler Maxson and Tyler Gonzalez are happy to get out of New York State. Taking on the Watkins Glen International Raceway for back-to-back event weekends, the teenage duo is again taking the positives of the two races as they look forward to Lime Rock Park in less than two weeks.

“First off, I owe the entire Copeland Motorsports crew a huge thank you for all the hard work they put in to build a brand-new race car from the ground up,” explained Tyler Gonzalez. “An unfortunate incident in the first weekend of action saw me hard into the outside turn one wall and a severely damaged car. The crew worked long days and into the nights on occasion to prep, build and put a new Hyundai Veloster N TCR on track, and really, we did not miss a beat.”

Putting the first weekend at The Glen behind them, the two Tylers focused on the task at hand this past weekend. Putting the new car through the paces in Friday’s practice, a qualifying session late in the day saw the #27 Copeland Motorsports entry score the fourth fastest lap of the session as they would line up outside row two for the two-hour event.

Falling back briefly but then driving back forward to where they started, Gonzalez was able to keep touch with the leaders before the mid-race driver change and pit stop saw Maxson hop behind the wheel. Pushing the car to the limit and running in the second position, Maxson crossed the line in P4, a solid effort considering what the team had gone through the week prior.

“We had a fast car, a potential winning car, and I am confident that I could have been on the podium,” added Maxson. “We were in P2 with a large gap before the yellow flag flew and under that caution something broke. I communicated to my engineer that there was an issue, possibly a broken axle or tierod. He told me just to push it to the end but to keep the car safe. I was able to do the best I could and nurse the car to the end to finish fourth. Happy to bring the car home in one piece but also disappointed that a late race issue possibly stole a podium from us. Either way, a huge thanks to Copeland Motorsports once again for all of their efforts.”

Following the race, two of the top-five cars were disqualified for being underweight in post-race technical inspection, including the #27 entry of Maxson and Gonzalez. A possible second turned into a fourth-place finish but that was then ripped from their hands following tech.

Maxson continued, “I guess if it wasn’t for bad luck, we would have no luck at all. Our Lime Rock Park event starts now, and we are aiming for redemption.”