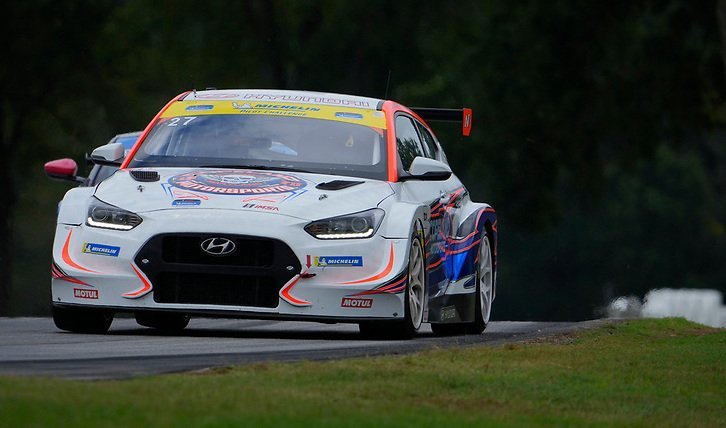 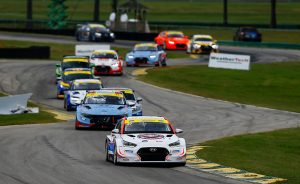 The new livery on the #27 Copeland Motorsports entry proved to bring some luck to the teenage duo of Tyler Maxson and Tyler Gonzalez this past weekend as they earned a fourth-place result at the Virginia International Raceway. Taking on the IMSA Michelin Pilot Challenge program, both drivers led laps but fell victim to some over aggressive driving and were forced to rebound to grab a top-five finish after falling as far back as seventh with less than thirty minutes remaining.

With two practice sessions, one on Friday and the second on Saturday, Maxson and Gonzalez would go to bed hoping that they had found the speed needed to contest at the front of the field. Finishing tenth in practice one and with rain hampering any dry weather laps in practice two, the pair would enter qualifying on Sunday morning looking towards the front of the field. With Gonzalez taking control of the wheel for qualifying, the Floridian turned the second fastest lap of the session to earn a front row starting spot as an incident cut the session four minutes early.

With only a few hours off until race time, Copeland Motorsports went to work establishing the best setup possible for the two-hour event. Gonzalez would take the green and moved to the point early, leading the majority of the first hour of the race before handing the controls to Maxson during the driver change. Maxson won a drag race off pit road to maintain the lead and continued the dominance of the Four Season Autowash backed entry. With forty-five minutes remaining, an over aggressive pass by a fellow competitor saw Maxson lose momentum and fall down the running order to sixth. Upset with the maneuver and non-call by officials, the Georgia resident turned up the wick and began to work his way forward. Turning some of the fastest laps in the last half of the race, Maxson moved into fifth with less than ten minutes remaining before passing for fourth on the penultimate lap.

“It was great to again qualify on the front row and race our way to the lead,” expressed Gonzalez. “We definitely had the pace and proved that with our multiple fast laps. Unfortunate to not end up with the win, but to be battling where we belong is a testament to the team that we have behind us. We have one more chance this season to stand atop the podium and look forward to that opportunity.”

Maxson added, “A big shoutout to the team for all of their hard work and support. Both Tyler and I had similar pace, and both had consistent and fast race laps during our stints. We were one of the quickest Hyundais but in this series, everything needs to be perfect. We were the victim of an anxious driver and though race control gave him a warning, it messed up our race. We will be back to fight hard at the next one and see if we can finish what we started this weekend.”

Next up to Tyler Maxson and Tyler Gonzalez will be the IMSA Michelin Pilot Challenge Series Finale at the famed Road Atlanta in Braselton, Georgia over the November 11-14 weekend.