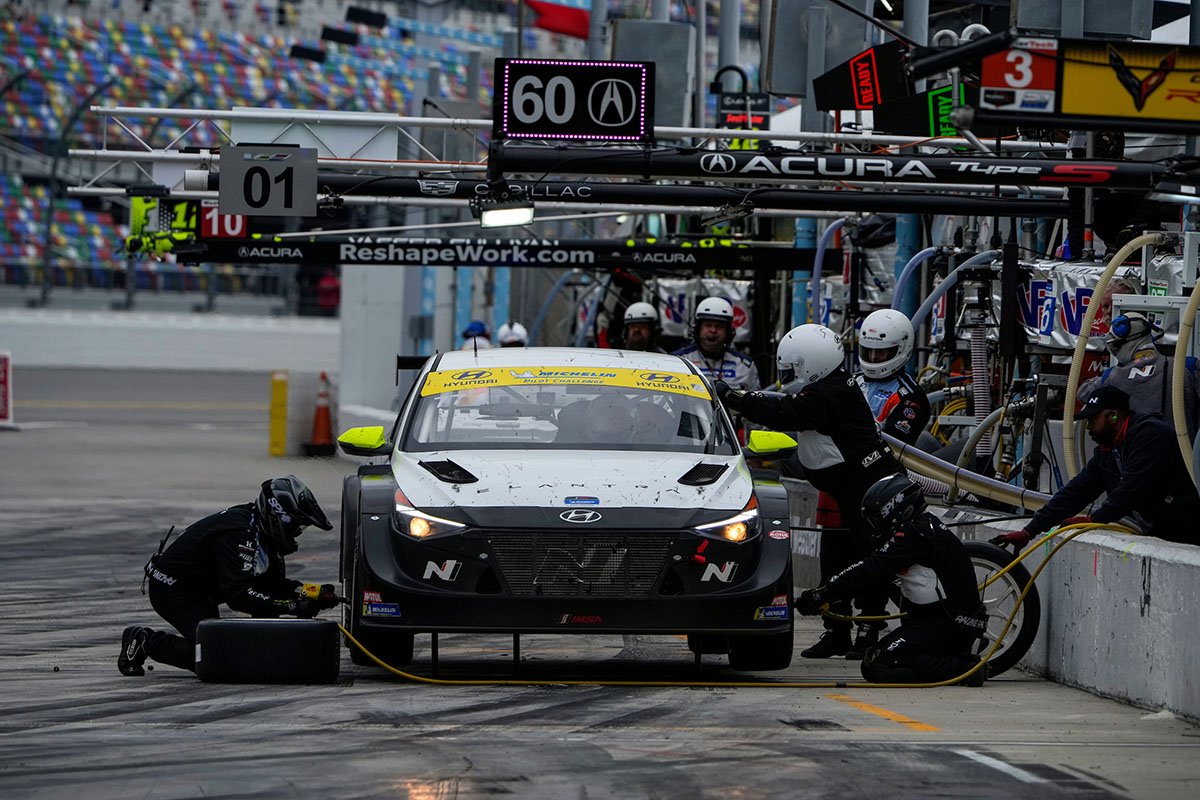 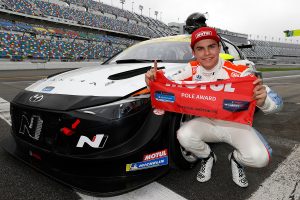 It was a weekend of firsts for Tyler Maxson to start his 2022 campaign. The first event of the 2022 season, the first official event behind the wheel of a Hyundai Elantra N TCR, the first race as a driver under the Bryan Herta Autosport with Curb Agajanian program, and the first pole position of the season. Taking on the famed Daytona International Speedway during the annual Rolex 24 Hours of Daytona weekend, Maxson and his teammate Mason Filippi showed great pace in both qualifying and race trim.

After an issue in the first practice session on Wednesday afternoon that saw the Maxson / Filippi #77 entry complete zero laps, the second session of the weekend would be the initial checks on a brand-new Hyundai Elantra N TCR before qualifying would take place on Thursday afternoon to set the grid for the four-hour race on Friday. Qualifying was the turning of the tides so to speak as the BHA crew made a strategy call to get Maxson out and potentially at the front of the field. With all but two cars going running in wet weather Michelins, Maxson opted for slick tires as he would wait for the damp but drying track to come to him.

“It was definitely slow going at first but in the end, a great strategy call by the team,” explained Maxson, who earned the pole position in his first event with Bryan Herta Autosport. “It took a while to get the tires up to temperature but when they were there, I was just hoping that the rain would hold off. A huge thank you to the team and Hyundai for the help and support. On to the race tomorrow.”

Rolling off the grid on the inside of the front row, weather conditions had changed for the better as competitors were greeted with clear, but cool conditions. Starting the race with the goal of saving brakes in the first few stints, Maxson led the field to green and battled in the top-five for the first ninety minutes. Pitting under yellow for new tires, Maxson was one of the quickest cars on the track as he drove up to fourth and settled in behind his teammates.

Maxson added, “We had a good car, we were just taking our time to make sure we could push hard at the end. There was no point battling my teammates as it would just cause us to lose time overall, so we sat in a line and continued the kill the clock.”

After his final stint, Maxson handed the controls of the #77 entry to Mason Filippi for the remainder of the race. Running his first full stint in the top-five, disaster would strike at the start of Mason’s second stint as a broken axle sent the Bryan Herta Autosport entry into the pits for repairs. After losing several laps to fix the issue, Filippi returned to the track and pushed the Elantra to a top-ten result.

“I want to thank the team for never giving up. They repaired the axle in quick time and got us back out there to gather data and learn for the future,” expressed Maxson. “Additionally, congratulations to the team on great results overall with two cars on the podium. I think we had the speed to be one of those cars, but luck was not on our side today.”

Next up for Tyler Maxson will be the two-hour event during the Mobil 1 Twelve Hours of Sebring event at the Sebring International Raceway.